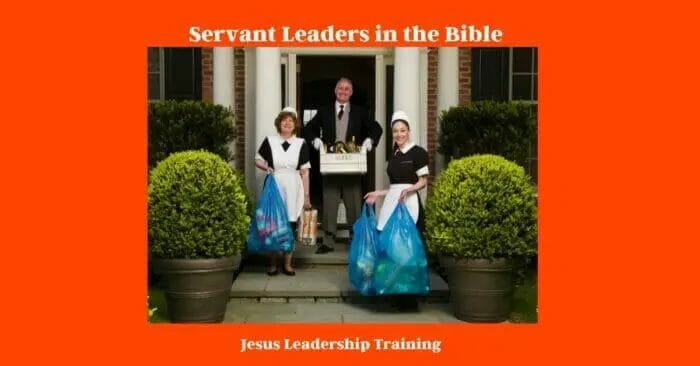 Servant Leaders in the Bible

What is servant Leadership in the Bible

The definition of servant leadership can be found in the book of Mark, where it says, “Whoever wants to become great among you must be your servant” (Mark 10:43). Christ himself set the example for us by washing his disciples’ feet (John 13:14). Servant leaders are those who are willing to put others first and serve them with humility. They’re also willing to sacrifice their own needs for the good of those they lead. True servant leaders have a heart for the word of god, they are Christian leaders that have a love for the flock of God. Their Leadership role is the type of leadership, not common to the rulers of the gentiles. It is the kind of leadership that christ Jesus showed when he washed the disciples’ feet.

It is found in the old testament, and the new testament all throughout the holy bible. Biblical Leadership is a witness of the sufferings of Christ to the glory of God. Men and women led by the Holy Spirit became servants of god serving the body of Christ.

In today’s world, there are countless examples of servant leadership. Teachers, for instance, often go above and beyond what is required of them in order to help their students succeed. Doctors and nurses frequently put the needs of their patients before their own.

And parents typically put their children’s needs ahead of their own. All of these people have one thing in common: they’re willing to serve others without expecting anything in return. As Christians, we are called to imitate Christ’s example by being servant leaders in our homes, churches, workplaces, and communities.

In a world filled with leadership programs and books on how to be a great leader, it can be easy to get lost in all of the noise. But if you want to find true servant leadership, you need to look no further than the pages of the New Testament. In this blog post, we’ll take a look at five ways you can identify a true servant leader using examples from Jesus and other leaders in the New Testament.

One of the best examples of this is found in Philippians 2:3-4, which says, “Do nothing out of selfish ambition or vain conceit. Rather, in humility value others above yourselves, not looking to your own interests but each of you to the interests of others.”

This verse lays out two key characteristics of a servant leader: putting others first and having humility. We see Jesus modeling this kind of selfless leadership throughout his ministry on earth. He washed his disciples’ feet (John 13:5), rode into Jerusalem on a donkey instead of a warhorse (Matthew 21:5), and he sacrificed his own life for our redemption (Philippians 2:8).

A true servant leader is focused on serving and not being served.

In Mark 10:45, we see Jesus talk about how he came “not to be served but to serve.” This is such an important distinction for any leader to make because it’s so easy to get caught up in wanting people to serve us instead of living our lives for service to others.

When we become focused on being served, we begin to view people as objects or commodities instead of human beings created in the image of God. But when we have a servant’s heart, we view others as creatures worthy of respect and dignity–just as Jesus did.

A true servant leader builds relationships based on trust and Transparency

One way we see this happening in the New Testament is through the sharing of personal stories. In John 4, Jesus shares His own testimony with the woman at the well in order to help her see Him as more than just a prophet–He is the Messiah she has been waiting for.

This act builds trust between them and creates a rapport that allows Jesus to share the Gospel with her effectively. In a similar way, when Paul is testifying before King Agrippa in Acts 26, he starts by first establishing common ground by talking about their mutual religious heritage before sharing his story about encountering Christ on the road to Damascus.

These examples show us that when we’re transparent about our own lives and experiences, it helps build bridges with other people and creates opportunities for Gospel proclamation.

A true servant leader is a humble leader.

One of the most well-known servant leaders in the Bible is Jesus Christ himself. And one of the things that made him such an effective leader was his humility. In Matthew 11:29, he says, “Take my yoke upon you and learn from me, for I am gentle and humble in heart, and you will find rest for your souls.”

When we are gentle and humble like Jesus was, it makes us approachable and easy to follow. People are attracted to servant leaders who are not full of themselves but instead are focused on others.

A true servant leader is a selfless leader.

Another example of a servant leader in the Bible is Stephen, who was known for his selfless love and care for others. In Acts 20:35, we see him say to the elders of the church in Ephesus, “In everything I did, I showed you that by this kind of hard work we must help the weak, remembering the words the Lord Jesus himself said: ‘It is more blessed to give than to receive.'”

Stephen was always focused on giving and serving rather than receiving. This attitude is what made him such an effective leader and servant of others.

A true servant leader is a servant first and a leader second.

This may seem like a no-brainer, but it’s worth stating because it’s so important. A servant leader is someone who puts others first–not themselves. They are focused on serving and not being served. And this servant attitude must be evident in everything they do, from the way they interact with others to the way they make decisions. When we put others first, we show that we care more about their needs and interests than our own. And that’s the kind of leader people want to follow.

How did Jesus Christ show us True Leadership? (God)

When we think of great leaders, people like Abraham Lincoln, Mahatma Gandhi, or even Winston Churchill come to mind. But what about Jesus Christ? In a time when the world was full of turmoil and change, Jesus provided a level of leadership that was unrivaled. So, how did he do it? Let’s take a look at the leadership style of Jesus Christ and see what we can learn.

The thing that made Jesus such an effective leader was his ability to connect with people on a personal level. He didn’t just give orders and expect them to be carried out; he explained his reasoning and tried to get people to see things from his perspective. He also didn’t shy away from tough conversations; when Peter denied knowing him, Jesus didn’t hesitate to rebuke him publicly.

Another trait that made Jesus a great leader was his humility. He was always quick to give credit where it was due, whether it was to his disciples or to God himself. He also wasn’t afraid to admit when he was wrong; after being confronted by the woman caught in adultery, he changed his mind and refused to stone her.

Perhaps the most important leadership quality of all that Jesus possessed was his compassion. He went out of his way to help those who were struggling, whether it was feeding the five thousand or healing the sick. He always tried to see the best in people, even when they did not deserve it.

When we think of great leaders, we usually think of those who are famous or well-known. But sometimes, the best leaders are those who are right in front of us. Jesus Christ was a leader who changed the world not through force or coercion but through love and compassion. We could all learn a lot from his example.

What are the Qualities of a Servant Leader

The term “servant leadership” was coined by Robert K. Greenleaf in The Servant as Leader, an essay that he first published in 1970. In that essay, Greenleaf said: “The servant-leader is servant first… It begins with the natural feeling that one wants to serve, to serve first.

Then conscious choice brings one to aspire to lead. That person is sharply different from one who is a leader first, perhaps because of the need to assuage an unusual power drive or to acquire material possessions…The leader-first and the servant-first are two extreme types. Between them, there are shadings and blends that are part of the infinite variety of human nature.”

The qualities of a servant leader can be summarized as follows:

Servant leader has a deep understanding of human nature and they are able to use this knowledge to influence the behavior of others. They know how to motivate people and they have keen insight into what makes people tick. This allows them to effectively manage and lead others.

A servant leader is someone who is always learning and growing. They realize that there is always room for improvement and they are constantly seeking out new knowledge and wisdom. They share what they learn with others in order to help them grow as well.

Servant leaders possess many admirable qualities that make them effective leaders. They lead by example, have a strong vision for the future, understand human nature, and are always learning and growing. If you aspire to be a leader, then strive to develop these qualities within yourself.

The examples of servant leadership in the Bible have these qualities: