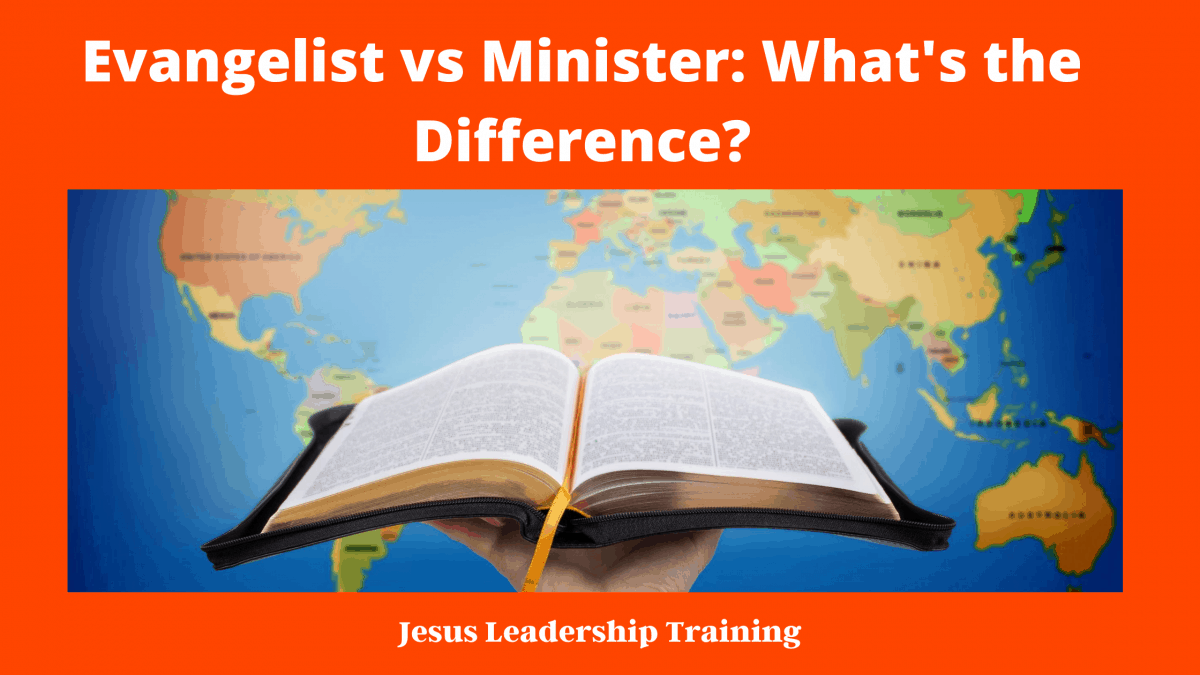 The main difference between an Evangelist and a Minister is, the evangelist tends to have a traveling, planting churches direction. Teaching and preaching in the location he finds himself, the minister tends ti minister to one local church. much of the service is the same, one having a more traveling nature.

Evangelist vs Minister / Fishers of Men: What’s the Difference?

Evangelist vs Minister, You have probably heard some people referred to as evangelists and others as ministers, and you have wondered whether there is a difference. Many times people interchange the terms, evangelist, minister, and preacher. For us to get to the truth about the difference between an evangelist and a minister, we have to turn to the Bible.

Who is an Evangelist?

So Christ himself gave the apostles, the prophets, the evangelists, the pastors and teachers, Ephesians 4:11

An evangelist is a believer that God has given the responsibility of equipping believers for the work of ministry in the Body of Christ. He or she spreads the gospel to the lost and is passionate about seeing others come to Christ.

I have Known several People that have the gift of Evangelism, over the years. They have spirit and heart to seek and save the lost. The one that sticks out in my mind, is a young minister that left the seminary to leave and preach. His Heart was to build where others had not built before. He established a conversion-focused ministry. Today it is in the thousands every weekend, with many campuses. Evangelist vs Minister / Fishers of Men: What’s the Difference?

God has called many believers to the offices of apostle, prophet, evangelist, pastor, and teacher. Those who have these gifts are also ministers and therefore an evangelist is also a minister.

In churches, you will find the terms evangelist and minister used interchangeably. Ministers are also those who lead ministries in the church and may not necessarily be evangelists or have the other four gifts above.

Paul was an apostle, teacher, and preacher, and he considered himself a minister. “Yet I have written you quite boldly on some points to remind you of them again, because of the grace God gave me to be a minister of Christ Jesus to the Gentiles” (Romans 15:15-16).

An apostle is one of the five gifts listed in Ephesians 4:11 above and this means that the believers with those gifts are ministers too.

The apostle Paul made it known to us that his spiritual son, Timothy, was an evangelist. He also exhorted him to continue to discharge his ministry duties. This shows us that an evangelist is a minister as Paul said in

2 Timothy 4:5. “But you, keep your head in all situations, endure hardship, do the work of an evangelist, discharge all the duties of your ministry.”

Although we don’t normally refer to an evangelist as a minister, the one holding this gift is considered a minister in the Bible.

Who is a Minister?

Ministers are generally those who serve in various ministries under leadership capacities. 2 Corinthians 5:17-19 says that as believers, we are charged with the ministry of reconciliation. We are to reconcile others to God by sharing the gospel of Jesus Christ. According to this Scripture, all believers are ministers in the various capacities that God has given them.

Therefore, if anyone is in Christ, the new creation has come: The old has gone, the new is here! All this is from God, who reconciled us to himself through Christ and gave us the ministry of reconciliation: that God was reconciling the world to himself in Christ, not counting people’s sins against them. And he has committed to us the message of reconciliation.

The assignments that God gives us are our ministry to others and although we don’t normally call ourselves ministers, we are. We have come to believe that those who are ministers are only found in the church and head the different ministries.

We are called to minister to the hearts of others with the gifts that God has given us. This is why Paul made it clear that transformed hearts are a testament to our ministry to others.

“You show that you are a letter from Christ, the result of our ministry, written not with ink but with the Spirit of the living God, not on tablets of stone but on tablets of human hearts” (2 Corinthians 3).

When you serve in a ministry and you are impacting the lives of others with your God-given gifts, you are ministering to them and you qualify to be called a minister. You may not use this term but according to the Word of God, you are recognized as one.

We minister to others in the church using the ministries God has given us. Some people minister through song, teaching, praying, preaching, prophesying, evangelizing, etc.

A minister is one who serves God under a certain ministry under the instruction of God. If you are an evangelist, you will minister in the ministry where God has called you.

The Ministry of an Evangelist

An evangelist normally has a ministry where they preach the gospel to others. You will notice that most evangelists have an itinerant ministry or are televangelists. They are people who love winning souls for the Kingdom of God and most of them hold crusades around the world.

James 1:5 says, “If any of you lacks wisdom, you should ask God, who gives generously to all without finding fault, and it will be given to you.” The wisdom you need is a prayer away, and you can trust that God will give you direction. He knows the people He wants you to reach as an evangelist and He will guide your steps along the way.

An evangelist is a minister, but we also have ministers who are not evangelists. The important thing to remember is that God has called every believer to minister to others using the gifts that He has given them. Whether you minister as an evangelist, apostle, teacher, etc. you are a minister of the gospel of Jesus Christ.