Thaddaeus in the Bible | Apostle | Thaddeus 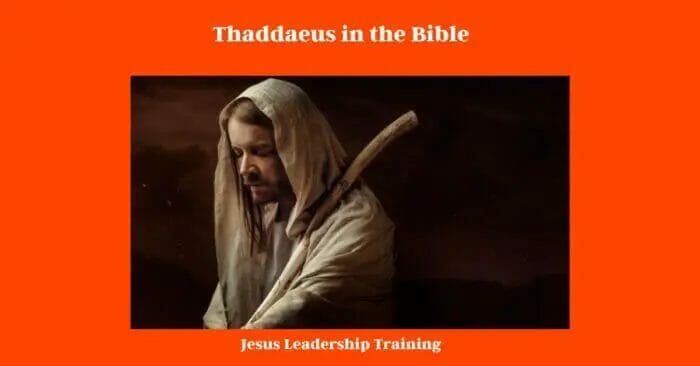 Do you know who Thaddaeus is? He is mentioned in the Bible, but not much is known about him. Some say that he was one of the twelve apostles, and others say that he was a disciple of Jesus. What we do know is that he was an important figure in the early church. In this blog post, we will take a closer look at the mysterious Thaddaeus and see what we can learn from him!

Thaddaeus in the Bible -The Bible mention Thaddeus / Thaddaeus

Thaddeus is mentioned 2 Times in the King James Bible:

Who was Thaddeus? (One of the Twelve Apostles)

Thaddaeus, also known by different names brother of John, Brother of James, Lebbaeus, and Jude, was one of the Twelve Apostles of Jesus. He is mentioned in the gospels of Matthew, Mark, and Luke as being among the apostles chosen by Jesus from his disciples (Matt 10:3, Mark 3:18). Beyond that, we don’t know much else about him.

There are a few things we can infer about Thaddaeus from the little information we have, though. First, we know that he was a man of faith. After all, he left everything behind to follow Jesus. That takes a pretty big leap of faith! Second, we know that he was willing to take risks. Again, leaving everything you know to follow a rabbi you barely know is definitely a risk. But it’s a risk that paid off for Thaddeus.

What does the Name Thaddaeus mean?

Have you ever wondered what your name meant? The name Thaddaeus is of Aramaic origin and it means “heart.” It is a variant of the name Jude.

In the New Testament, Thaddaeus is mentioned as one of the Twelve Apostles. He was also known as Lebbaeus and Jude. Not much else is known about him except that he was from Cana in Galilee and was martyred in Persia.

Jesus and the Sea of Tiberias

The Sea of Tiberias, also known as the Sea of Galilee, was a big part of Jesus’ ministry. He spent a lot of time walking along its shores and even teaching from a boat out on the water. But what do we know about this body of water? Let’s take a look.

The Sea of Tiberias is actually a freshwater lake that is located in northern Israel. It’s about 13 miles long and 8 miles wide and is fed by the Jordan River. The lake is surrounded by mountains and hills, which create a very beautiful landscape.

During the time of Jesus, the area around the Sea of Galilee was very fertile and had a lot of vegetation. This made it a perfect place for farming. In fact, many of Jesus’ disciples were fishermen who made their living off the lake.

One of the most famous stories involving the Sea of Tiberias is when Jesus walked on water. In Matthew 14:22-33, we read about how Jesus came to his disciples who were out in a boat on the lake. He walked out to them on the water and they were terrified! But Jesus calmed their fears and got into the boat with them.

The Sea of Tiberias was an important part of Jesus’ ministry. He spent a lot of time walking along its shores and even teaching from a boat out on the water. It’s a beautiful freshwater lake that is located in northern Israel and is fed by the Jordan River. The area around the lake was very fertile during the time of Jesus and many of his disciples were fishermen who made their living off the lake.

Who were Jesus’ Apostles?

The term “apostle” comes from the Greek word apostolos, which means “one who is sent forth.” In the New Testament, the term is used to refer to those disciples of Jesus who were chosen and appointed by him to spread his gospel. Usually, when we think of the apostles, we think of the Twelve—the inner circle of disciples who Jesus chose to be with him during his earthly ministry. But there were actually other apostles as well, including Paul and Barnabas. In this blog post, we’ll take a look at all of the apostles, both the Twelve and the others.

These twelve men were with Jesus throughout his public ministry, including during his miracles, teachings, sufferings, death, and resurrection. After Jesus ascended into heaven, they continued to preach and teach about him throughout the world. They also wrote a number of New Testament books, including Matthew, John, Acts, Romans, and Revelation.

In addition to the Twelve Apostles, there were also other apostles in the New Testament Church. For example, Matthias was chosen by lot to replace Judas Iscariot after Judas betrayed Jesus and committed suicide. And Paul and Barnabas were appointed as apostles by the church at Antioch (Acts 14:4). Both of these men went on to have significant ministries within the early Church.

The apostles were an essential part of early Christianity. Not only did they spread the gospel throughout the world; they also wrote a number of New Testament books that are essential for our understanding of who Jesus is and what he accomplished for us on the cross. As we read their stories and study their writings, we can learn valuable lessons about faithfulness, obedience, courage, and perseverance.

Where does Tradition have Apostle Thaddaeus working during his life? ( Saint Jude Thaddaeus)

Blog Introduction: Though not much is said about him in the Bible, Tradition has Thaddaeus working as a missionary and an evangelist in Syria, Mesopotamia, Persia, and Lydia. He is also said to have worked with Saint Barnabas and Saint Timothy.

Though the Bible only mentions him by name in the lists of the Twelve Apostles in Matthew 10:3 and Mark 3:18, Thaddaeus is said to have also been known as Lebbaeus and Jude. He is also believed to be the author of the Epistle of Jude. In addition to these biblical mentions, Thaddaeus is also mentioned in apocryphal works like the Acts of Thomas.

Thaddaeus’s feast day is celebrated on October 28th by Eastern Orthodox Churches and on August 21st by Western Churches. He is typically represented in religious art as holding a club or an axe, as these are the instruments of his martyrdom.

Thaddaeus was one of the original twelve apostles chosen by Jesus Christ himself. Though not much is said about him in Scripture, Tradition has him working as a missionary and an evangelist throughout Syria, Mesopotamia, Persia, and Lydia. His feast day is celebrated on October 28th by Eastern Orthodox Churches and on August 21st by Western Churches.

Where Does Tradition Say Thaddaeus Died?

Every Easter season, we hear the story of Jesus and his disciples. We know that Judas betrayed Jesus and that Peter denied Him. But what about the other disciples? What happened to them after the crucifixion?

Thaddaeus was one of the twelve apostles of Jesus. He is also known as Jude or Lebbaeus. Not much is known about him from the Bible, but tradition says that he was a relative of James the Just and that he preached in Syria, Mesopotamia, Egypt, Libya, Cyprus, Edessa, and Armenia. He is said to have been martyred in Beirut.

There are many traditions surrounding the death of Thaddaeus, but we don’t know for sure how he died. What we do know is that he was a faithful disciple who preached the Gospel throughout the world. He is a reminder to us that even though we may not be famous like Peter or Paul, we can still make a difference for Christ in our own way.

Thaddeus is thought by bible scholars to have been