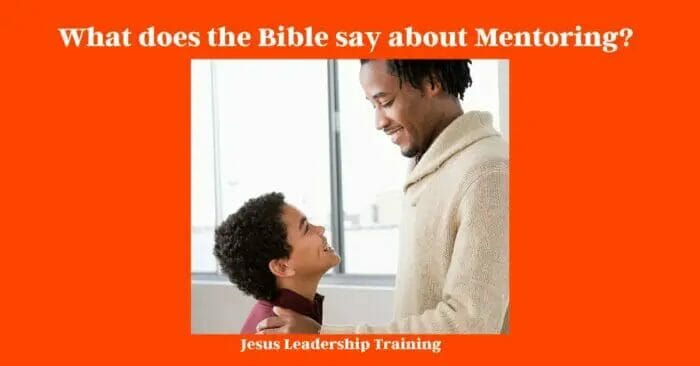 What Does the Bible say about Mentoring – Mentoring is one of the most important relationships that you can have in your life. A mentor can help guide and support you through difficult times, offer wisdom and advice, and be a friend when you need one. But what does the Bible say about mentoring? In this blog post, we will explore what the Scriptures have to say about this important topic. We will look at both the Old Testament and New Testament, and see how mentorship can be used to further God’s kingdom. The Word of God encourages seeking wise counsel and seeking a mentoring relationship. Christ Jesus Taught 12 and gave special attention to three.

The word Mentor is not in the Bible but the Thoughts of Seeking wise counsel, striving, and seeking wisdom are very often taught.

What does the Bible say about Mentoring?

As Christians, we are called to mentor others and to be mentored. But what does that actually look like? What does the Bible say about mentoring?

Mentoring relationships can be formal or informal, but they should always be built on trust. A good mentor is someone who you can go to for advice, someone who will pray for you, and someone who will challenge you to grow in your faith.

The Bible has a lot to say about mentoring! Here are a few verses that mention mentoring or being mentored:

Proverbs 27:17 says, “Iron sharpens iron, and one man sharpens another.” This verse is often used to describe the importance of Christian fellowship; as we spend time with other believers, we sharpen each other and grow in our faith. But this verse can also apply to mentoring relationships. As mentors and mentees spend time together, they sharpen each other spiritually.

2 Timothy 2:2 says, “And what you have heard from me in the presence of many witnesses entrust to faithful men who will be able to teach others also.” In this verse, Paul is charging Timothy (his mentee) to pass on what he has learned from Paul to other faithful men, who will then teach others. This verse shows us the importance of passing on what we have learned from our mentors to others. Timothy was also mentored by older women in his Christian life. His Mother and Grandmother.

Proverbs 1:8-9 says, “Hear, my son, your father’s instruction, and forsake not your mother’s teaching…they are an ornament of grace to your head and chains about your neck.” In these verses, Solomon is urging his son to listen to his parents’ instruction and not forsake it. This is significant because it shows that parents are supposed to be our first mentors! They are supposed to teach us about God’s Word and how to live according to His ways.

What is the definition of Biblical Mentoring?  (King James Bible)

This relationship is built on trust and mutual respect, and it typically lasts for a period of several months to a year. During this time, the mentor will meet regularly with the mentee, usually once per week, to discuss Scripture, pray together, and fellowship. The ultimate goal of biblical mentoring is to help the mentee become a strong and faithful follower of Christ.

There are a lot of programs out there that focus on helping people grow in their faith, but one of the most effective is biblical mentoring. In this type of program, a more experienced believer meets with someone who is newer in their faith on a regular basis. It is especially important that new Christians seek a spiritual mentor.

Together, they read and study the Bible, pray together, and discuss how to apply what they are learning to their everyday lives. This type of close relationship is modeled after the way that Timothy was mentored by Paul in the Bible. The Bible has Numerous examples of the apostle paul, a man of understanding and having a personal relationship with those he mentored.

And just as Timothy grew in his faith and became a great leader in the early church, so too can people who are involved in biblical mentoring programs. By meeting regularly with someone who can guide them and answer their questions, they can learn how to live out their faith in all areas of their life. As a result, biblical mentoring can be an immensely valuable tool for helping people to grow in their faith.

Who can be a Bible Mentor? (James Bible Online)

A Bible mentor is somebody who can help you to understand and apply the Bible to your life. They don’t need to be a theologian or a pastor, but they should be somebody who knows the Bible well and loves God. If you’re looking for a Bible mentor, here are a few things to consider.

First, find somebody whose spiritual maturity you admire. It’s important to have somebody who can challenge and encourage you.

Second, make sure that they’re somebody you can trust. This person will be helping you to grow in your faith, so you need to be able to share openly and honestly with them.

Third, consider whether they have the time and commitment to invest in your relationship. A good Bible mentor will want to meet with you regularly and spend time getting to know you. If you’re looking for somebody who can help you grow in your faith, a Bible mentor can be an invaluable asset.

How can we let the Holy Spirit Guide us to a Godly Mentor?

As Christians, we are called to follow Jesus Christ and His teachings. One way that we can do this is by finding a godly mentor who can help us grow in our faith. But how can we find such a mentor? The answer lies in letting the Holy Spirit guide us.

When we ask God to lead us to a godly mentor, He will put people in our lives who can help us grow spiritually. These mentors may not always be who we expect them to be, but if we are open to the guidance of the Holy Spirit, He will lead us to someone who can help us on our journey of faith. So if you are seeking a godly mentor, let the Holy Spirit guide you, and you will find the help you need.

The Bible is full of examples of godly mentors, both male and female. Let’s take a look at a few of them.

Why do Wise Men / Godly Leaders Surround themselves with Wise Counselors?

We all know the story of Solomon, the son of David who was given the opportunity to ask God for anything he wanted. Solomon could have asked for long life, riches, or power but instead, he asked for wisdom. The Bible says in 1 Kings 3:9 that Solomon’s request pleased the Lord.

Because Solomon chose wisely, God blessed him with wisdom and with all the things he didn’t ask for. Not only was Solomon blessed with wisdom but the bible tells us that because he chose wisely, God also gave him wealth and honor like none of the other kings before him or after him (1 Kings 3:13).

As young people, it’s so important that we also surround ourselves with wise counselors. By doing this, we can learn to make wise decisions that will please God and lead to our blessings.

So how do you Surround yourself with Wise Counselors?

1) Pray and ask God to reveal who those people are in your life.

2) Be careful of who you take advice from. Just because someone is older than you or has been through a lot doesn’t mean they are wise. Oftentimes, people give advice based on their own life experiences and perspectives which may not be accurate or helpful.

3) Spend time around wise people. You can learn a lot just by observing how they live their lives and handle different situations. If you don’t know any wise people personally, you can still learn from them by reading their books or listening to their podcasts.

4) Ask questions! Don’t be afraid to get clarification on something you don’t understand or want more information about.

5) Be teachable! Even if you think you know everything, there’s always room for growth. Be open to learning new things and growing in wisdom.

6) Last but not least, apply what you’ve learned! It won’t do any good if you surround yourself with wise counselors but don’t actually put their advice into practice.

Final Thoughts – What does the Bible say about Mentoring

Surrounding yourself with wise counselors is so important because it gives you the opportunity to learn from other people’s experiences and perspectives. When you make wise decisions, it pleases God and leads to His blessings in your life. Mentoring is an effective way for an older generation to teach Younger women and younger men God’s Plans So pray and ask God to reveal who those people are in your life, be careful of who you take advice from, spend time around wise people, ask questions, be teachable, and apply what you’ve learned!