Are all Bibles the Same| PDF 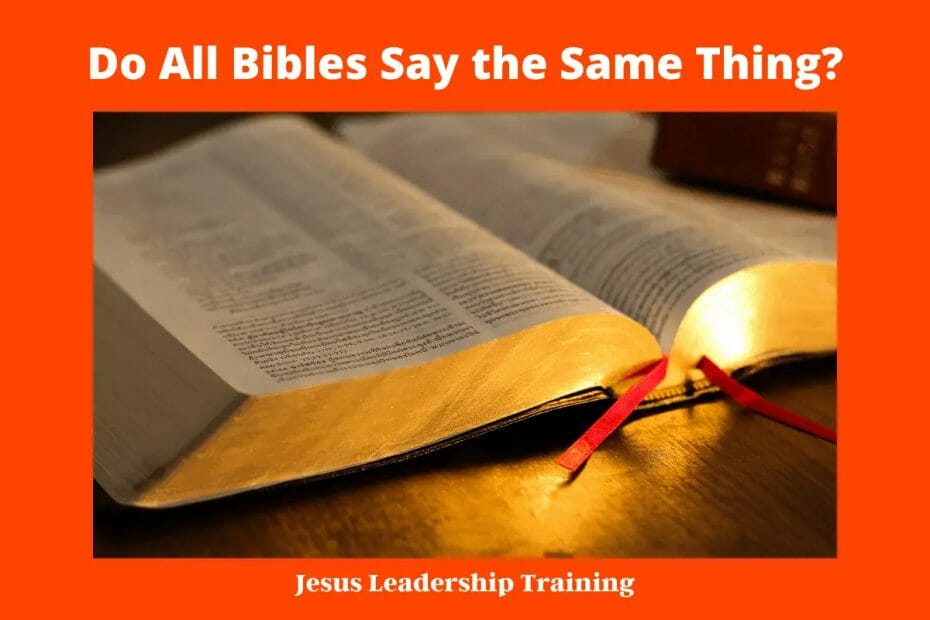 Are all Bibles the Same – As a General Rule, the Majority of Bibles say the same thing, the differences come in by translations and paraphrases. The Old Testament original was Hebrew. New Testament in Arabic and Greek. Translations are where the original text was translated into different languages. Also, some are translated into various grade understanding Levels – KJV – 12th Grade, NIV – 7th Grade Level

Are all Bibles the Same? – Why So Many Different Bibles?

Most Bibles say the same thing only that they use different words and phrases, but the meaning remains the same. However, there are some Bibles that are different from most others and even include books not found in the regular ones. Let us now look at when Bibles say that same thing and when they don’t.

II Timothy 3: 16-17, All scripture is given by inspiration of God and is profitable for doctrine, for reproof, for correction, for instruction in righteousness: That the man of God may be perfect, thoroughly furnished unto all good works

God in the Old Testament, God in the New Testament spoke through men Inspired by him. They were recorded and written down for our instruction.

When Bibles say the Same Thing

Are all Bibles the Same? – Most Bible versions that Christians use say the same thing; the message they present is the same as other Bibles. If you go to a Bible website and query a verse in all versions, you will see the similarity in words and phrases. Most of the time there is no much difference. Look at John 3:16 in the Bible versions below.

For God so loved the world that he gave his one and only Son, that whoever believes in him shall not perish but have eternal life. NIV

For this is how God loved the world: He gave his one and only Son, so that everyone who believes in him will not perish but have eternal life. NLT

For God so loved the world that He gave His only begotten Son, that whoever believes in Him should not perish but have everlasting life. NKJV

The three versions above may differ in some words but the message is the same. You will find that some Bibles have simpler language than others, and this is a big factor in how people select which version to use. Many times the different versions will give a different perspective of the same verse and this will increase your understanding of the passage of Scripture you are reading.

The easiest way you can tell if all Bibles say the same thing is to go to a site like Bible Gateway, look up a Bible verse, and view it in all English translations. You will get a long list and as you read through each, you will tell whether the versions agree with each other or not. You can then make a decision on which Bible translation you will use going forward.

There are over 450 Different English Translations.

Over 7117 Different Languages in the World

Paraphrases are very powerful, not in a word-by-word understanding of scripture, but the goal of most paraphrases is to take God’s word and make it as understandable and digestible as possible. One of the Ones I like looking at was the “Living Bible”

Are All the Bibles the Same?

How to Tell the Difference?Translation / Paraphrase

One of the best and easiest ways is to look at the Preface in the bible you are looking at. It will describe whether it is a translation or a paraphrase. many times they will explain how they developed that Bible.

Bible Commentaries are great Study aids. many Great Biblical Scholars over the years have written, their thoughts on what the meaning and implications of scriptures mean. They are not inspired. But Great Men had devoted their lives to praying and studying God’s Word many times in the original languages it was written.

These Bible have the same basic Bible translations, but they include in their notes and commentary having their focus in their titles.

Today we have electronic translations that give God’s Child a wealth of access to God’s Word, at the tips of you fingers.

Sadly, not all Bible translations say the same thing. I’m sure you have noted that some preachers gravitate toward a particular Bible version like the King James Version (KJV). This is because they have established that this particular version is the most accurate. Bible versions tend to differ on some verses, and when the differences are major and deviate from the message, it is proper to find the accurate one.

When I was Growing up, the King James Version (Translated in 1611) was the most used Bible Translation being used. Most Preachers, preached, read, memorized this translation. It was the one taken and dispersed throughout the English Speaking World. This was powerful because at one time, Great Britain, England were in most places in the world. So Followed English Bibles.

The King James Version was translated into the English Language in the 1600’s – some of the meanings of words have changed. Thee’s and Thou’s are not commonly used today. It is today rated at a 12th Grade level of understanding. Comparing that to the New International Version Translation is said to be at a 7th Grade Reading comprehension level.

Bibles Exploded as technology did key technology that exploded it are

Word Project is a site that has identified certain verses that mean one thing in the KJV Bible and another in the other versions. This kind of analysis will help you make a wise decision when buying or using a Bible version.

Always look for the Bible version that is the most accurate. An easy way is to find out what others have to say about the different versions after doing their research.

The danger of holding on to a Bible version that is not accurate is that you will misinterpret Scriptures and you will lose their meaning. Many people have taken action based on certain Bible verses only to realize they misinterpreted them and did not have the true meaning.

It may sound very enlightening to use several Bibles for your study, however, it may be counterproductive if some are inaccurate. The different versions are translated by a variety of organizations and each has its Bible scholars who give an interpretation of the source documents that contain the original Scriptures. Read further on what inspires these organizations to come up with Bible translations.

Books Known as the Apocrypha

The Apocrypha are books that are not included in the regular Bible because they are not compatible with the message of the gospel. However, some denominations use Bibles that include the apocryphal books (e.g. Tobit, Sirach, 1 & 2 Maccabees). There is a lot of information on the internet about these books and even excerpts that will show you the falsehood they bear.

Hebrews 13:9 tells us not to be carried away by various and strange doctrines and this means that we ought to be careful about the Bibles we choose to use. We are to test all things and to hold fast to what is good according to

1 Thessalonians 5: 16-21. 6 “Rejoice always, 17 pray continually, 18 give thanks in all circumstances; for this is God’s will for you in Christ Jesus.19 Do not quench the Spirit. 20 Do not treat prophecies with contempt 21 but test them all; hold on to what is good, 22 reject every kind of evil.”

You want to be sure that the word you store in your heart is the truth because God will only stand by His truth. The truth is what sets you free, but only if you know it. False doctrine purporting to be Scripture will not set you free but keep you in spiritual bondage.

How to Pick the Right Bible Version

The first step in choosing a Bible version is to pray about it because God will reveal to you which Bible translations are accurate and which ones are not. He will guide you to the right Bible and where to get information that will help you make the right choice.

After praying, do some research on Bible translations and why people prefer one version over the others. This way, you will get some reasons that will enlighten you.

Depending on your need, if you just want general, easy to grasp scriptures, you might want to buy New International Version. This one reads easy and is very easy to understand. Perfect for adults down to teens for helping God’s Children comprehend God’s Instructions.

If You would like deep study. I was always taught that the American Standard was the one of choice. I also bought bibles that allowed me to write heavy notes while I studied. When I preached I literally put my notes right in my bible. I could reference them quickly and they were there for years in the future. I tended not to change translations because they became so treasured to me because of all the hours of study that I had made notes in.

The translation I used for years and still have is my Revised Standard Bible. ( I believe it was a Holman RSV Student / Study Edition) I did not pick it for any scholarly reason, But I found it easy to read, because of the printing layout and it easily allowed me to add notes. I have recovered that bible 3 Times over the years. Not wanting to et it go I have asked Darlene to Bury me with it. Just a very Close Friend.

For those who studied Hebrew, there are Hebrew Translations of the Old testament. There are also great translations on one side of the page in Hebrew, and the other is English.

There are also Greek Translations, corner any Greek Teacher and check out the translation he uses it will be very enlightening to you. There are also side/by side/ translations of Greek and English, they are very Common.

God is always ready to give you wisdom when you lack it because He knows that your human wisdom is limited. Once you start doing your research on Bible versions, you will probably come across verses that people use in their everyday lives, and which are inaccurate and they use them without much thought. The last thing you want is to keep quoting a Bible verse that is from a wrong Bible translation.

Armed with the right information, you can then head to your local Christian bookstore and get your new Bible. If you happen to have a translation that is accurate and reliable, thank God for you are on the right track.

previousHow to Preach the Gospel to Unbelievers | Unbeliever – An Effective Guide
nextMy Pastor Keeps Asking for Money” – What Should I do?
Subscribe
Login
0 Comments
Inline Feedbacks
View all comments