What does the Bible say about Boasting | Boast? 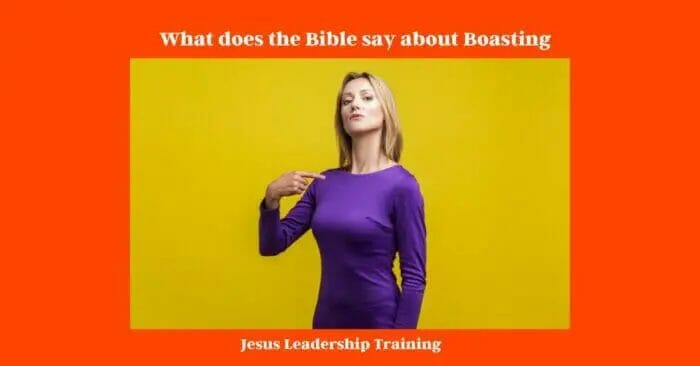 What does the Bible say about Boasting

The Bible has a lot to say about boasting and how it is viewed by God. In Proverbs, we are told that “pride goes before destruction, and a haughty spirit before a fall.” This means that when we boast about our accomplishments or possessions, we are setting ourselves up for a fall.

When we boast we are trusting in our own skill, our own strength, instead of recognizing where the true source is from. Our Blessings are a gift of God, from Christ Jesus by the cross of our Lord Jesus Christ.

James tells us that “god opposes the proud but gives grace to the humble.” This means that God is against those who boast about their accomplishments or possessions, but he is willing to help those who are humble. The Bible also tells us that “boasting is not good,” and that we should “be careful not to boast about anything.”

Boasting is used in two ways in the Bible.

It is also described as a Boaster, or Braggart

James 4:16 says, “As it is, you boast in your arrogance. All such boasting is evil.” This verse tells us that boasting is arrogant and prideful. When we boast, we are putting ourselves above others and saying that we are better than them. This is clearly something that God does not approve of.  In the New Testament of the Holy Bible God’s Steadfast love is shown in the last days. By the result of works, sober judgment and the love of God

Why is Boasting Wrong?

Boasting is wrong because it ultimately leads to pride. And as we can see from the verses above, pride is something that God strongly opposes. Why is that? Because Pride leads to our downfall. It’s when we start thinking too highly of ourselves and our own abilities that we get into trouble. We begin to think that we don’t need God and that we can do things on our own. But as Proverbs 16:18 tells us, that kind of thinking always leads to destruction in the end.

What Does the God Say About Humility?

So if boasting is bad, then humility must be good, right? That’s exactly what the Bible teaches us. James 4:6 tells us that God gives grace to the humble but opposes the proud. In other words, when we come before God with humility, He will bless us. But when we come with pride, He will resist us.

How Can We Live Humbly? (Bible Verses)

If we want to live humbly, 1 Corinthians 10:31 gives us a great starting point. It says “So, whether you eat or drink, or whatever you do, do all to the glory of God.” In other words, our goal should be to honor God in everything we do- whether it’s big things like our career choices or small things like what we eat for breakfast. When our goal is to bring Him glory in everything we do, it will naturally keep us from boasting about our own accomplishments because we’ll realize that everything we have comes from Him anyway.

The next time you’re tempted to boast about your accomplishments or compare yourself favorably to others, remember what the Bible has to say about humility and boasting. Boasting leads to pride and ultimately destroys us while humility puts us in a position to receive God’s blessings. So set your mind on glorifying God in all you do and reject prideful thoughts and behavior today!

These Bible Verses are Great to read in many different Bibles to get a clearer understanding: Checking our references in both Old Testament and the New.

As Human Beings we can carry the cross of Christ to the street corners sharing eternal life to our dear friends.

What does the Bible say about Gloating

The Dangers of Gloating According to the Bible

The dictionary defines gloating as feeling or showing smug satisfaction over one’s own success, fortune, or good luck, often at the expense of others. Synonyms for gloating include relishing, reveling, wallowing, and exulting.

Gloating is generally considered to be a very negative trait. It is considered rude and insensitive. It is the opposite of being humble. When we gloat, we are saying that we are better than others. We are bragging and showing off. This can make others feel bad about themselves and can make us look bad in their eyes.

Leviticus 19:14 says, “Do not put yourself forward in the king’s presence or stand in the place of the great; for it is he who confers honors on you, not you on him.” This verse tells us that we should not try to take the place of those who are more important than us. We should not try to make ourselves look better than others by bragging or showing off. We should let others take the spotlight and give honor to those who are more worthy than us.

Proverbs 27:1-2 says, “Do not boast about tomorrow, for you do not know what a day may bring forth. Let another praise you, and not your own mouth; someone else, and not your own lips.” This verse tells us that we should not boast about our accomplishments or what we are going to do in the future. We don’t know what tomorrow will bring, so we shouldn’t get ahead of ourselves. Instead, let others praise us.

The Bible has a lot to say about gloating and why we should avoid it. Gloating is considered rude and insensitive. It is the opposite of being humble. When we gloat, we are saying that we are better than others. We are bragging and showing off. This can make others feel bad about themselves and can make us look bad in their eyes. So let us avoid gloating and instead focus on giving glory to God in everything we do!

What does the Bible say about being Proud

The Bible speaks strongly against pride. In Proverbs, we are warned that “pride goes before destruction, a haughty spirit before a fall” (16:18). And in James, we are told that “God opposes the proud but shows favor to the humble” (4:6).

Pride is an attitude of self-importance and self-sufficiency, thinking that we don’t need God. It’s a dangerous attitude because it sets us up for a fall. We think we can handle things on our own, but ultimately we need God’s help. When we are Prideful, we are putting ourselves above others and looking down on them. This creates division and hostility instead of unity and love.

The Bible challenges us to humility instead of pride. When we humble ourselves, we acknowledge our dependence on God and our need for his strength and wisdom. We also recognize the dignity and worth of others, seeing them as equal to us in God’s eyes. As we give up our prideful attitudes and submit to God, he will lift us up in due time (1 Peter 5:6).

What does the Bible say about Bragging

The bible has a lot to say about bragging and being humble. In Matthew 6:1-4, Jesus says, “Beware of practicing your righteousness before other people in order to be seen by them, for then you will have no reward from your Father who is in heaven.

And your Father who sees in secret will reward you.” In this passage, Jesus is warning against bragging about our good deeds or trying to gain attention for our acts of generosity. He says that those who seek recognition will only receive earthly rewards, but those who live quietly and anonymously will receive heavenly rewards.

A biblical perspective on bragging

It’s no secret that our culture today is obsessed with self-promotion. We see it everywhere we go, from social media to reality TV. But what does the bible have to say about boasting and bragging? Let’s take a look.

Proverbs 27:1 tells us, “Do not boast about tomorrow, for you do not know what a day may bring.” In other words, we should be careful not to get ahead of ourselves. We don’t know what the future holds, so there’s no use in bragging about things that might never happen.

Ecclesiastes 5:2 says, “Be not rash with your mouth, nor let your heart be hasty to utter a word before God, for God is in heaven and you are on earth. Therefore let your words be few.” This verse reminds us that we should think carefully about the words we speak. We should never say anything that we might later regret.

Matthew 6:2 says, “Therefore when you do a charitable deed, do not sound a trumpet before you as the hypocrites do in the synagogues and in the streets, that they may have glory from men. Assuredly, I say to you, they have their reward.”

This verse teaches us that we should be humble in our giving. We shouldn’t do good deeds just to receive praise from others. Instead, we should do them for the simple joy of helping others.

Final Thoughts – What does the Bible say about Boasting

Boasting is a sin that we need to avoid. The Bible is clear on this point. When we boast, we are being arrogant and prideful. We are also doing something that God finds repulsive. Let’s commit to being humble people who do not boast about ourselves or our accomplishments. Instead, let’s give glory to God who deserves all the credit for everything good in our lives!

The next time you’re tempted to boast or brag about something, remember these biblical verses. Pride comes before the fall, so it’s always best to keep our heads down and stay humble. After all, as Proverbs 16:18 tells us, “Pride goes before destruction, And a haughty spirit before a fall.”

previousWhat does the Bible say about Beards | Beard | Bible
next9 Thoughts: What Does the Bible Say about Leaving a Church | Church | Leave
Subscribe
Login
0 Comments
Inline Feedbacks
View all comments