Can a Church Loan Money to its Members? Biblical Guidance 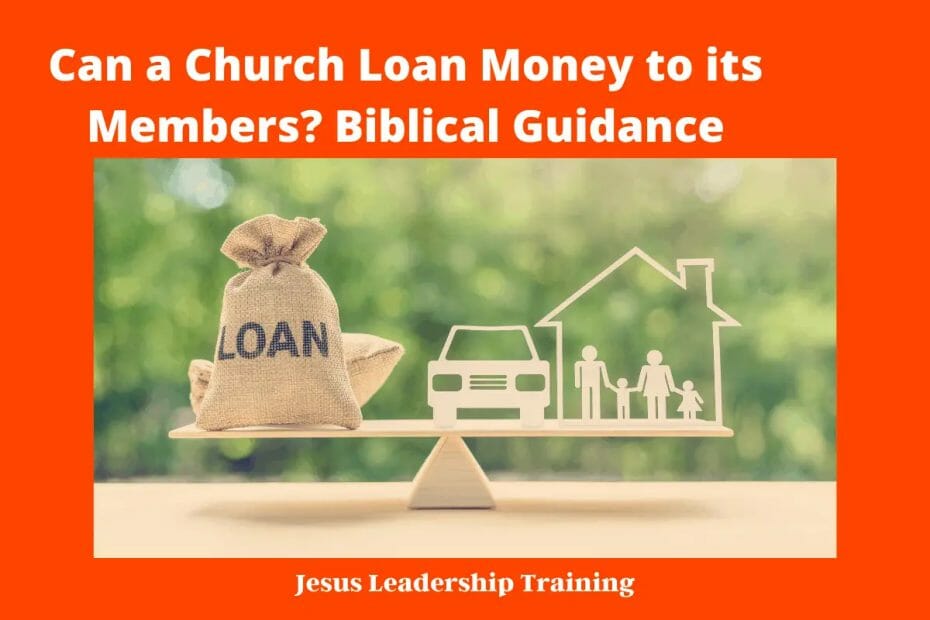 Can a Church Loan Money to its Members / Old Testament Principles

Do Not Charge Interest

It seems that money as a medium for obtaining goods and services has been around forever. many time is was coins made from metal, gold, and silver. The jews had Shekels, The Persians, the Babylonians all had their own currencies.

Moses shared with the Children of Israel as they were leaving Egypt that between themselves if some needed to borrow it should be from a motive of service and not of making a profit.

If you lend money to one of my people among you who is needy, do not treat it like a business deal; charge no interest.

The second Principle that the Jewish Children of God Practiced was debt forgiveness every 7 years. During a time of servitude and prison time for nonpayment of debts. Allowed the one that had borrowed it they could not pay it back be forgiven. You see this in Jesus’ days also.

(Matthew 18: 28-32) “But when that servant went out, he found one of his fellow servants who owed him a hundred silver coins.  He grabbed him and began to choke him. ‘Pay back what you owe me!’ he demanded.29 “His fellow servant fell to his knees and begged him, ‘Be patient with me, and I will pay it back.’

30 “But he refused. Instead, he went off and had the man thrown into prison until he could pay the debt. 31 When the other servants saw what had happened, they were outraged and went and told their master everything that had happened.

32 “Then the master called the servant in. ‘You wicked servant,’ he said, ‘I canceled all that debt of yours because you begged me to. 33 Should not you have had mercy on your fellow servant just as I had on you?’ 34 In anger his master handed him over to the jailers to be tortured until he should pay back all he owed.

Jesus teachings on collecting and storing of earthly treasures can be misleading. In His Parable on the Rich Man and Lazarus this thought stands out that our wealth is fleetring. If Blessed with it it should be used with Godly Intent.

(Luke 16: 19-31) Jesus shared this, 19 “There was a rich man who was dressed in purple and fine linen and lived in luxury every day. 20 At his gate was laid a beggar named Lazarus, covered with sores 21 and longing to eat what fell from the rich man’s table. Even the dogs came and licked his sores.

22 “The time came when the beggar died and the angels carried him to Abraham’s side. The rich man also died and was buried. 23 In Hades, where he was in torment, he looked up and saw Abraham far away, with Lazarus by his side. 24 So he called to him, ‘Father Abraham, have pity on me and send Lazarus to dip the tip of his finger in water and cool my tongue because I am in agony in this fire.’

25 “But Abraham replied, ‘Son, remember that in your lifetime you received your good things, while Lazarus received bad things, but now he is comforted here and you are in agony. 26 And besides all this, between us and you a great chasm, has been set in place so that those who want to go from here to you cannot, nor can anyone cross over from there to us.’

27 “He answered, ‘Then I beg you, father, send Lazarus to my family, 28for I have five brothers. Let him warn them so that they will not also come to this place of torment.’29 “Abraham replied, ‘They have Moses and the Prophets; let them listen to them.’

30 “ ‘No, father Abraham,’ he said, ‘but if someone from the dead goes to them, they will repent.’31 “He said to him, ‘If they do not listen to Moses and the Prophets, they will not be convinced even if someone rises from the dead.’ ”

In The Book of Acts we find the early Christians following the teachings of Jesus felt that sharing was the way to show their love for each other. The Church had begun in Jerusalem. Many of the People had traveled to Jerudsalem for the feast had been converted to Christianity. They remained there as the First Church, the first body of believers. Some having mor than others they willingly shared.

(Acts2:42-47) 42 They devoted themselves to the apostles’ teaching and to fellowship, to the breaking of bread and to prayer. 43 Everyone was filled with awe at the many wonders and signs performed by the apostles. 44 All the believers were together and had everything in common. 45 They sold property and possessions to give to anyone who had need. 46Every day they continued to meet together in the temple courts. They broke bread in their homes and ate together with glad and sincere hearts, 47 praising God and enjoying the favor of all the people. And the Lord added to their number daily those who were being saved.

Many people in the world today are struggling to make ends meet. Life has become hard, and people have lost their jobs. It is only right for us as believers to try and help others the best way we can. But the question is, can a church loan money to its members?

Someone may say, if the body of Christ needs to unite and be there for one another, it is only right for the church to come through for members needing help. And rightly so but should it do so by giving them loans? Well, while the cause may be right, some things need to be put into consideration.

There are so many challenges associated with borrowing and lending money.  So as much as it is good for the church to help its members, we cannot act blindly on some of the things that are associated with lending money. If you are a leader in the church that is thinking of helping church members by giving them loans, you need to face the following facts before you start doing so:

If a Church Does Loan to Members

Some Members will Take Advantage of the Church

Since this is money being given by the church, some people will feel entitled because they tithe or give to the church. They will borrow money even though they don’t really need it.  Rules and regulations need to be set in place so that only people with genuine problems can be helped.

While money in itself is not evil, we need to understand that some people, even those that are in the church, love money which is the root of all evil

(1Timothy6:10).  “For the love of money is a root of all kinds of evil. Some people, eager for money, have wandered from the faith and pierced themselves with many griefs.”

Even though the church will be doing this to help members, some people especially those who do not qualify for the loan will feel left out and end up being angry at the church leadership because they did not get a loan from the church.

Some of the Members Will not Pay

As much as the church really wants to help its members, we need to face the fact that there will be members who will not pay their loans. They will promise to pay, but after receiving the money, they may not make any payments because they believe the Church will forgive them for it is a sacred institution.

Another reason why it is not a good idea for the church to lend money to its members is that the Bible calls a borrower a slave to the lender.  It will be awkward when the member of the church feels like a slave to the borrower, which is the church. The church will have to set up rules for people to adhere to, and this will cause church members who want loans to sign documents that allow them to receive money from the church.

It may not sound like a bad thing at first, but with time those members who cannot pay the money will feel out of place when they come to church because they will always be reminded about the money they owe the church

The church and its members should have a cordial relationship.

If you still believe that this is the right thing to do for your church, consider doing the following to avoid issues that may crop up from the on start:

Talk to financial and law experts about this and let them give you counsel on which kinds of rules to set so that they can govern how loans are given and paid by members of the church.  Yes, this is a church, but you need to know that even in the church, some rules and regulations need to be followed.  The person in charge of giving out the loans should adhere to these rules in all cases so that people do not feel left out.

For example, the kind of financial challenges that will qualify someone for the loan needs to be clear from the very start.  That way, members of the church will know that it is only people with such problems that can go and get loans from the church.  The church also needs to come up with legal ways in which to deal with someone who does not pay the loan within the stipulated time.

Financial institutions give out loans with interest, but as a church, you may have to forego this first of all because the Bible discourages (Deuteronomy 23:19) believers from charging interest on loans, and secondly churches are non-profit organizations.

Yes, the church can loan money to its members, but the truth is, there are so many challenges associated with that than if members got loans from other financial institutions that offer the same services, it might be wiser.

A lot will be at stake if the church decides to give loans to its members.

It is good to help each other, especially in the body of Christ, but we need to face reality, especially when it comes to money.  Some people will not be willing to pay the money in time while others will borrow money because they want to maintain a particular lifestyle that they are accustomed to.

There will be division in the church because some people will not be happy when they are not given loans. Some of the members are going to leave the church when they fail to pay their loan in time.  If the church still decides to go ahead and loan money to its members, then rules need to be set in place before you begin. A Gift and a Blessing can turn sour if not handled with the spirit of